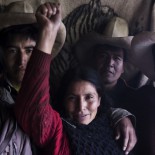 Reporting on the conflict between the mega mining project Conga and the people of Cajamarca, Peru

For the past 16 months the people of Cajamarca, Peru have risen in their hundreds of
thousands to protect their right to life which is being threatened by the mega mining
project Minas Conga. In this time five protesters have been killed and more than 140
injured; human rights defenders have been detained without charge and beaten in
poilce custody; community leaders are facing a barrage of outrageous legal charges
against them; the region endured a 90 day state of emergency and suspension of their
fundamental rights; and the people continue to live under increased militarization of
this once tranquil land.

So what are the people of Cajamarca fighting against? Minas Conga is a Project of
Yanacochca – majority owned by US-based Newmont and backed up by Buenaventura
of Peru and the World Bank. With this Project they plan to exploit 3069 hectares of
land (30,690km²) to extract the gold and copper that lies beneath. This land happens
to be the water source for more than 30,000 people in 200 communities spanning
three provinces.

They plan to drain and exploit two of the most important lagoons and the material
they will extract will be dumped on top of two others – effectively cutting off the head
of the entire water system. In place of the water than runs from the lagoons into the
five major rivers they plan to pump the waste water from the mine. Over the life span
of the project they plan to dump an average of ninety thousand tons of toxic tailings

The people have a live example of the devastation that will come from Mina Conga.
For the past 19 years in the region of Cajamarca the same mining company has been
operating the largest open pit goldmine in South America – Mina Yanacocha. During
this time farmers have lost their livelihoods due severe water shortage (the lagoon
that used to feed the region is now a dry pit), the rates of cancer in the región are
extremely high, and the fish are dying in large quanties due to the toxic waste that
is pumped into the rivers. Yanacocha was also responsable for a mercury spill that
left 1,200 Choropamapa villagers poisoned – to this day people are still dying from
the effects. In a direct contradiction to the economic benefits supporters of the mine
proclaim, since the mine has been in operation Cajamarca has gone from being the
fourth poorest region of the country to the second poorest. This is the previous work
of Yanacocha, and Conga plans to be three times the size.

Since the protests last summer that left 5 dead the government have called a two
year suspension of the project. However it is clear that neither the government nor
Yanacocha plan to give up their 4.8 billion dollar project. So Yanacocha continues to
build their resevoirs and their roads in preparation for the go ahead to extract, and the
government continues to protect them.

But the people also continue to fight for their rights, for their way of life. From the
countryside to the cities the people are organising and building their capacity to resist.
They’re connecting with struggles in other parts of the country – different places but
with a story all too familiar. Also vital to the resistance is international solidarity – with
the eyes of the world on Cajamarca it is harder for the oppression to continue. People
outside of Peru can inform themselves, inform others, pressure the points of power
they have access to, make sure their investments, savings and pensions aren’t funding
any of the companies involved, and most importantly show the people of Cajamarca
that they do not fight alone.

For up to date information in Spanish please visit http://www.celendinlibre.wordpress.com.

The Conga Mine, Peru – Comments on the Environmental Impact Assessment and Related Issues